Editorial – Punch Drunk: Why Boxing Should Be Worried 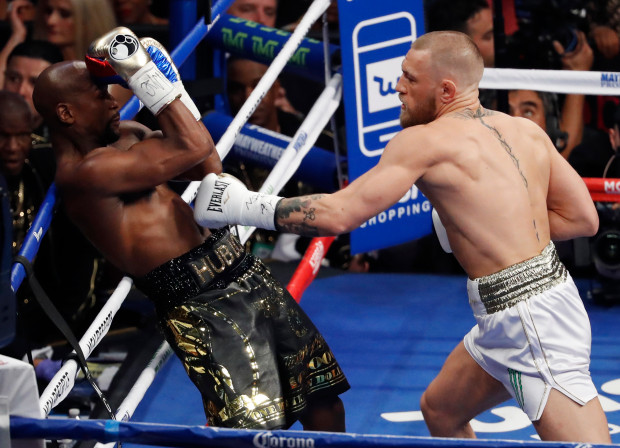 On August 26, 2017, in Las Vegas Nevada, two of the greatest fighters in the world finally meet face to face, ready to battle. Conor McGregor, the 28 year old MMA fighter from Dunlin Ireland. And is currently the UFC featherweight and lightweight champion, who’s MMA record stands at 28-3-0. Challenges, the Boxing legend from Grand Rapids Michigan, the undefeated champion of the Boxing world, Floyd Mayweather!

On that night, Floyd Matweather had done what he was predicted to do. He had beaten Conor McGregor in the 11th round of the match. Mayweather had landed 170/320 of his total punches. His jabs were surprisingly low, only 18/59, and with power punches were 152/261. With his total punches, he landed 58% of his punches. McGregor actually was able to hold his own with Mayweather, his numbers may have been low. But, his numbers were actually superior to many other experienced professional boxers who have fought against Floyd. McGregor landed a total of 111/430 punches, 27/59 jabs, and 84/332 power punches. An overall 26% landed punches. With these numbers, Conor McGregor was able to land 30 more hits than Manny Pacquiao, 19 more than Shane Mosely, and only 6 hits from tying Canelo Alverez. Looking at these numbers and statistics, Conor was actually able to hold his own when fighting Floyd, and did better than multiple hall of famer boxers.

The outcome of the fight was easily predictable. McGregor walked into the ring with only one month of training, and no boxing experience. Though he has been known for his stand-up fighting capabilities in the octagon, boxing is a different league of fighting.  Floyd, having already won 49 fights in his career, took the victory very strategically. Mayweather claims his plan was to “tire him out”, and that he did. Conor has trained his whole life to fight in the world of martial arts, and Conor has been seen to have a loss of energy when fighting in the octagon. Boxing time is much longer than a standard UFC main event, boxing being a total of  36 minutes (3 minutes a round, 12 rounds total), and UFC main events being a total of 20 minutes (5 minutes a round, 5 rounds total). This is where Conor met his demise. Boxing is a faster pace sport than mixed martial arts, in MMA, you’re always on the defensive while trying to attack and counter your opponent, UFC fighters have been seen taking their time due to them never knowing where their opponent will attack next. Conor was not able to keep up with such a faster paced sport, and by the 11th round, Floyd was given the victory due to his experience, boxing capabilities, and use of startegy. If given more time to train and maybe get some actual boxing experience, the fight may have turned out differently for McGregor. Floyd was able to wait Conor out with a risky strategy, and did what the world expected him to do.

What does this fight mean for boxing and mixed martial arts? After this fight, all of boxing should be embarrassed. Conor McGregor walked into the sport of boxing with only a month of preparation for his debut fight, and fought against one of the greatest boxers of all time. McGregor was able to do the unthinkable, from fighting at different weight classes in the UFC and taking the belt for both weight divisions, and was able to come into a completely different sport, and did better than multiple boxing hall of famers by landing 15 or more punches than multiple professional, and extremely experienced boxers who have fought Floyd Mayweather. This should leave the sport of boxing, and boxers themselves, embarrassed. This says a lot for the sport of fighting. It especially says that mma fighters cannot be underestimated, it shows that any fighter from the UFC could come and make something of themselves in the boxing world when the work is put in for it. Julian Garcia of Morton West High School states, “I think what McGregor did was iconic, the man went into a completely different fighting style and held his own, and he works his hardest and was able to prove his game and what he’s worth.” .Ben Schwartz of Morton West High School, also shared his thoughts on the fight, “I personally believe the fight was rigged, both fighters seemed to only be in on it for the money. But other than that, this was a great opportunity to bring both sports together, Conor lasted way longer than I thought he would, and had a great performance. And this was something the fans have been asking for and I’m glad it happened.” And when speaking of the fans, this fight has been something the fighting community has been asking for, and all their questions have been answered. This fight really showed that anything is possible, and that any fighter can do the impossible, you just have to put the work in. The fans, though some left disappointed or happy with the outcome, and some left with an amazing memory of two great fighters going at it, should be grateful that this fight was able to happen, and hopefully fights like these could happen more in the future.

Overall, this was an amazing fight. Two legends were able to settle their differences and also be able to come out and give the fans what they want. Conor McGregor of the UFC and martial arts world, came out and showed the world that he is what he says, an amazing fighter. Floyd Mayweather also showed that he is a man who won’t back down from a challenge, and will show what he is worth just like Conor McGregor has done during this fight. Putting money aside and putting aside trash talk and bragging rights. This was one of the greatest moments in fighting history, and possibly sports history. On August 26, 2017, Floyd “Money” Mayweather and Conor “The Notorious” McGregor, came out onto the boxing ring and put on a spectacular show for the world. This fight was one for the ages, and will go down as one of the greatest moments in fighting history.