Morton Players, Coaches Encouraged by 41-13 Win vs. AT 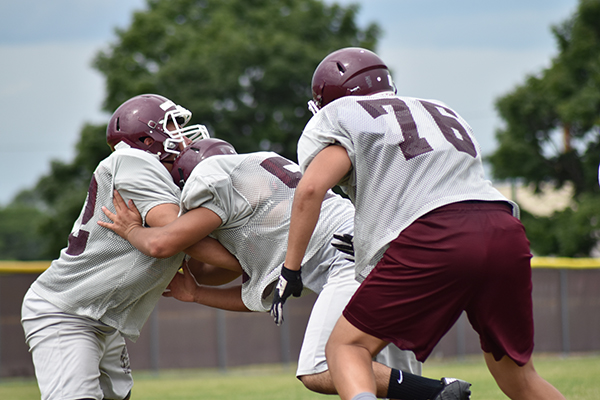 Opening a season with three games on the road is never easy, but Morton Mustangs varsity football is sticking with a consistent refrain:  perseverance.

That perseverance is on display as the revamped Mustangs have opened their season with a 1-2 record, rebounding with a 41-13 victory over the Blazers of Addison Trail Sept. 10 after losses to Riverside-Brookfield and York.

Despite the 28-point margin of victory over AT last Friday night, it hasn’t been an easy road – or road trip. The season started ominously on Aug. 27 when the Mustangs fell behind in the first half against the Bulldogs. A sustained offensive drive on Morton’s first offensive possession failed to yield points, and a costly Morton fumbled handoff inside their own red-zone gave RB a 16-yard defensive scoop-and-score that earned the Bulldogs a 13-0 lead in the 2nd quarter.

But all through the early adversity, Morton Offensive Coordinator Dan O’Donnell noted that the team kept its composure.

“Kids battled, they never gave up,” O’Donnell said. “In the first half [against RB], we made a lot of mental mistakes. These were ‘day 1’ mistakes we made, but we were able to correct them at halftime with a few adjustments. In years past, I think the guys would have been thinking, ‘here we go again,’ but they just kept fighting.”

That fight was evident in the second half, as Morton rallied on both sides of the ball from a 20-0 deficit in the 3rd quarter. Both sides of the ball assisted in rallying with two scores before senior running back Quentin Dillon II capped off Morton’s furious second-half rally by pounding a touchdown and subsequent 2-point conversion into the RB endzone. That score gave Morton a 21-20 lead with less than two minutes left in the game.

“We definitely changed our attitude,” said team captain Julian Hernandez. “We started off and we thought we could control the game, but when we didn’t it got in our heads a little bit. We changed our attitude and came out firing in the 2nd half. Everyone was picking each other up on the sidelines, there were no hanging heads from players.”

O’Donnell echoed Hernandez’s sentiments.”We talked about four quarters, that this was going to be a four-quarter battle all game,” he added. “Don’t worry about the score:  just give yourselves an opportunity to win this game. I was super-proud of the kids and their no-quit attitude.”

But the furious rally came up short when Riverside-Brookfield kicker Matt Novak hit a 49-yard field goal as time expired to give the Bulldogs the 23-21 victory.

Perseverence was a key factor for Morton, as the team’s physical conditioning allowed them to take the competitive advantage in a second half that saw a number of stoppages due to players cramping on an 88-degree night.

Another significant part of that ‘no-quit’ attitude was the stalwart play of Morton’s defensive line. The unit consistently won or held the line of scrimmage throughout the contest, allowing Morton to regain their footing and mount the second-half rally.

“There are some guys in there, Gio Rodriguez, Dante Patton, Christian Weatherly, you don’t even notice what they’re doing, they just do their job, and it allows the other guys to make plays.” “It’s a nice group, and a strong point of the team, as well.”

But the 54-0 loss to York on Sept. 3 was a tough reminder of the challenges of opening the season on the road in three straight games.

“Two of them are senior nights as well, so you get there, and all of a sudden you have a 30-minute delay. It’s tough, because kids are amped up and ready to go, and as a coach, you’re used to being on-schedule, on-time. We tell our guys, sometimes things are unexpected, they don’t go your way, and just like in the game, you have to be prepared to handle adversity.”

And the positive trends are emerging early in this season. O’Donnell’s offense is slowly crafting an identity for itself as a multi-pronged rushing attack with senior David Arana (40 carries, 295 yards, 2 TDs) at the tip of the spear. The offense’s misdirection abilities and Arana’s explosiveness combined to produce the highlight of the season last Friday night when Arana slipped around the right side of the line and rushed 77 yards for a touchdown.

So far, Morton’s ground game has totaled 616 yards and 7 touchdowns on 111 attempts, averaging 5.5 yards-per-attempt, while opponents are averaging only 3.61.

Heading into the Homecoming tilt against Leyden, the arrow is pointing up for head coach Bob Organ and the Mustangs.