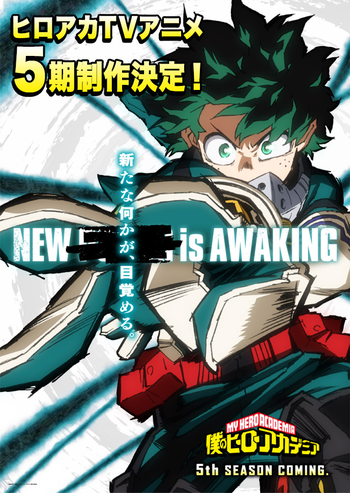 Any fan of anime has definitely heard of My Hero Academia, an incredibly popular anime that made it’s anime debut in April of 2016. After 29 volumes, 4 seasons, 2 movies, and 2 video games, the highly anticipated season 5 is now airing.

My Hero Academia tells the story of Izuku Midoriya, a student at a superhero highschool (called UA) in a world where a majority of the population has some sort of power. This anime is particularly popular among teenagers and young adults.

Reception for the new season has been quite good, picking up exactly where season 4 left off after an anime original recap episode, then moving on to the Class 1A vs 1B arc, in this arc both of the hero course classes in UA are fighting as a combat training routine.

The animated series adapts content from the comics (japanese comics being known as manga). Seeing as everything that will be appearing in the animated series already has appeared in the manga, a lot of fans speculate on what the story will be covering this season.

Season 4 covered manga content from chapter 124 to 190, 56 chapters in total and about 3 and a half story arcs. Since season 1 the pacing has sped up over time, each season having a higher chapter to episode adaptation radio. If season 5 follows the same structure as season 4, which is likely considering a story can only be paced so fast before it’s too fast, it will end on or very close to chapter 257.

Why is chapter 257 significant however? If season 5 ends on chapter 257 it will cover exactly 3 arcs while adapting the only one more chapter than season 4. Throughout the entire series each season has adapted 3 to 4 arcs per season, so this would also work.

Now for the predictions, keeping arcs two and three nameless here for spoiler reasons, arc one, Class 1A vs 1B (and the wrapping up from where season 4 left off, will cover 30 chapters, arc 2 adapts 20 chapters, and arc 3 adapts 17 chapters leaving off on a cliffhanger for season 6.

If this is all true then this allows season 6 to focus on covering the largest arc in My Hero Academia thus far, spanning from chapters 254 to 306 (the overlap of chapters 254 to 257 is a transitionary period between arcs). Making season 6 cover 53 chapters and have some room near the end to tease another season or to pad out some chapters from the comics that didn’t get enough attention originally. That’s a good thing about adapting the manga, the creator and animators can make adjustments or fixes to the story that they didn’t notice the first time.